The Day I Didn't Die

I've kept a journal since I was 5 years old.

This is an excerpt from the entry I wrote in the Mental Hospital after I had attempted suicide:

"I'm in the nuthouse. I tried to overdose on Friday and I'm in the pshyc ward in our community hospital. I don't know why I did really... Nicole was crying because the guy she likes- likes me. Cody and Jon are fighting because of me. My parents are upset and disappointed in me. I just got tired of being the problem.
I gained some weight and Liz and Becky are so thin. Even here, there's an anorexic who weighs 87 pounds. I wish I was thinner. I wished I could disappear. I still do. I just needed a break. I should have done it another way.... taken a vacation- I don't know what I could have done, but I should have known better. These people haven't helped me. There has only been one orderly named Greg who has spoken to me like I'm a human being also.

My parents are pretty angry at me. I think they are pretty embarrassed. I guess that I am too."

After I was released from the hospital I began a strange calm and chaos in my life. People were different around me. They knew I was slightly crazy.

Cody's sister, Misha showed up at my house and told me to pack my things and I was moving into her house.

She let me stay there for free. Every few days she wrote me a letter and left it on my door. The letters told me to have a good day. Told me the things she saw in me that were good and that she loved me.

I still have those letters. 17 years later.

My creations made me feel less alone.

I remember staying up through the night sketching this with a bic pen on a piece of cardboard: 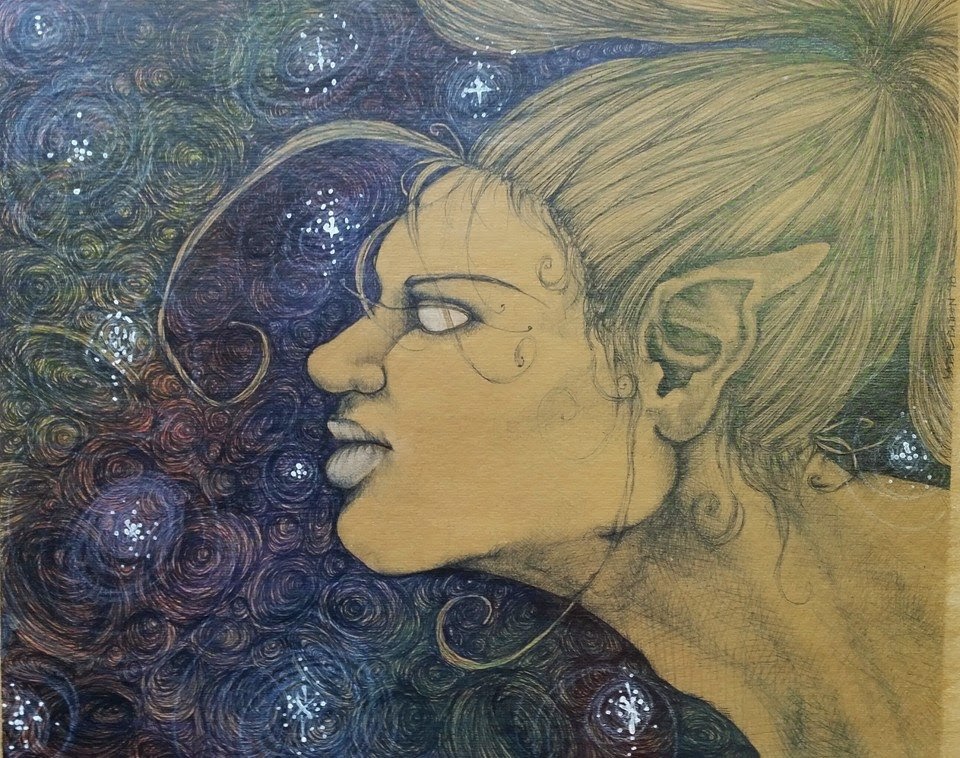 I remember looking at it for a long time....

I had been feeling like I had no place in the world, I had nothing to offer the world and that it was no better for having me in it... if not worse.
I remember thinking I could die and no one would notice or care... that there was nothing I contributed to the world and I would disappear as if I had never existed....

But, This sketch was a turning point for me. I looked at it and thought "Well, I guess there's that. If I wasn't here in the world this wouldn't be either."

Not that it was perfect or artistically sound... but it was mine. It was something I made and I liked. I realized it didn't have to be "Perfect" to be something that mattered. I still have this piece of cardboard.

The road SELF-ACCEPTANCE didn't end there... but perhaps began there. I've had a rollercoaster of a path since then as many of you know; but most importantly, I know that the reason I am so committed and passionate to serve others to see SOMETHING- anything about themselves that is wonderful... that we see each other as what we TRULY are---- not what the 3rd dimensional world tells us we are... is because I have lived the life I have.

I was the misfit, the outcast, the blacksheep, the one to be ashamed of.....

I create drum circles to teach and to learn and to share time and space with others looking for somewhere to be free and selfless and loving. A safe place for people to unify and dance and come from the heart.... I don't curse the pain I've walked through- it's the fire that fuels my passion to alleviate suffering of those I see.

Misha, saved my life by seeing good in me that I didn't see.

I have taken a stand to do the same.
That is why I have THE I AM MESSAGE. That is why it matters.